While Nouns and Verbs provide equal approaches for working with resource objects, in isolation neither are capable of producing an effect on those objects. To do anything with objects, Nouns and Verbs must work together, as shown by the below image. In that image, Nouns flow to or intersect with Verbs and Verbs flow to or intersect with Nouns. This intersection of Nouns with Verbs and Verbs with Nouns is known in EmpowerID as an Action. An Action is a desired outcome of working with an object, such as deleting a mailbox (or restoring a deleted mailbox). Each EmpowerID Action is linked to a specific workflow that when initiated by a delegated user performs the Action in question against one or more objects of a particular resource type. Each resource type has a number of Actions associated with it that makes sense for that type. For example, the Exchange Mailbox resource type has 9 possible Actions that can be performed against any mailbox resource objects, ranging from the Delete Mailbox Action to the Disconnect Mailbox Action to the Edit Reject Messages From Action. EmpowerID provides users access to each of these Actions through Action tiles accessible from a number of locations within the EmpowerID Web application. One of those locations is the Actions accordion that appears on a resource object's View One page. View One pages allow you to interact with a particular IT resource, viewing details about that resource and performing workflow operations against it as needed.

Although the Nouns, Verbs and Actions provided out-of-the-box by EmpowerID are linked to specific resources and the workflows tied to those resources (such as Exchange Mailboxes), you can create your own Noun-Verb-Action combinations as "navigation paths" for your users to follow to accomplish any tasks possible within your environment. For example, if your organization has a Salesforce account, you could create a Noun called CRM Records and then add to that Noun category custom pages that are links in Salesforce.com and Actions that point to these pages. In this way, the Noun-Verb-Action model can be viewed simply as a “user interaction” or navigation system that allows you to classify pages, workflows, and access or asset requests by one or more Nouns and Verbs.

The following image depicts how both of these paths lead to the same outcome—a filtered list of "Actions" that can be initiated based on the combination of Nouns and Verbs selected. "Path 1" shows the steps to the Action from a "Verb-oriented" approach and "Path 2" shows the steps to the same Action from a "Noun-oriented" approach. 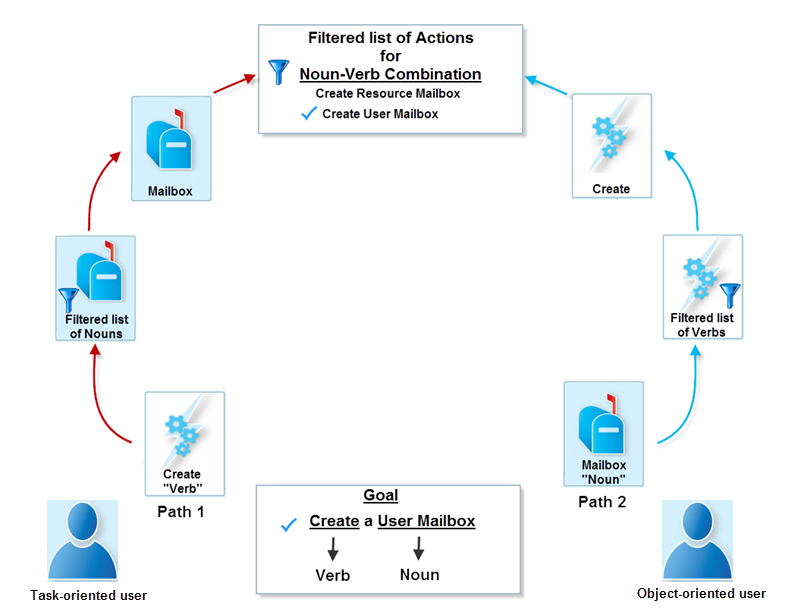 In the above image, both users start with the same goal: They want to create a user mailbox. To accomplish the goal, the "object-oriented" or "object-focused" user takes the "Nouns" path and from the Home page of the EmpowerID Web application, clicks on the Things to Manage (Nouns) tile. This tile takes the user to a list of Nouns, one of which is Mailbox. The user then clicks on the Mailbox tile to navigate to a list of Verbs appropriate for the Mailbox "Noun." From this list, the user clicks on the Create tile. This takes the user to a list of possible Actions for the "Mailbox-Create" Noun-Verb combination.

In both scenarios, the filtered list of Actions available to the user is exactly the same.