The EmpowerID Universal Connector was developed to address an important need expressed by organizations seeking to lower their costs and to gain more control over their IAM implementation by allowing them to use their own internal DB resources to create both simple and advanced connectors for their directories and applications. Now IT staff using common skill-sets, such as Microsoft SQL, can quickly build their own connectors without a knowledge of the EmpowerID API or its connector technology. This greatly simplifies connecting EmpowerID to a custom system, saving time by allowing staff to start building connectors immediately without specialized training and it eliminates the need to pay for professional services to build system connectors, whether of basic or advanced functionality.

How the Universal Connector Works

The Universal Connector is an out-of-the-box standard connector like the AD connector that connects to a middleware repository or queue that sits between the EmpowerID Identity Warehouse and the custom system. The Universal Connector does not connect EmpowerID directly to a target resource system for inventory or data discovery. Rather, the Universal Connector serves as bridge between that system and EmpowerID. This bridge is an intermediate SQL database, and is in fact the object to which the Universal Connector connects. Since this intermediate database is always identical for each custom application, no custom code is required for EmpowerID to bidirectionally inventory and manage users, groups, roles, and locations. In this model, organizations export the data they want EmpowerID to manage from their custom identity store to the intermediate database via their preferred technology, including scripting, an ETL tool like Microsoft SSIS, or code in the language of their choice. EmpowerID then inventories the data from that database and provisions objects in EmpowerID, such as user accounts, groups, locations, business roles and EmpowerID Persons. From a high level, the flow for this can be represented by the below image: 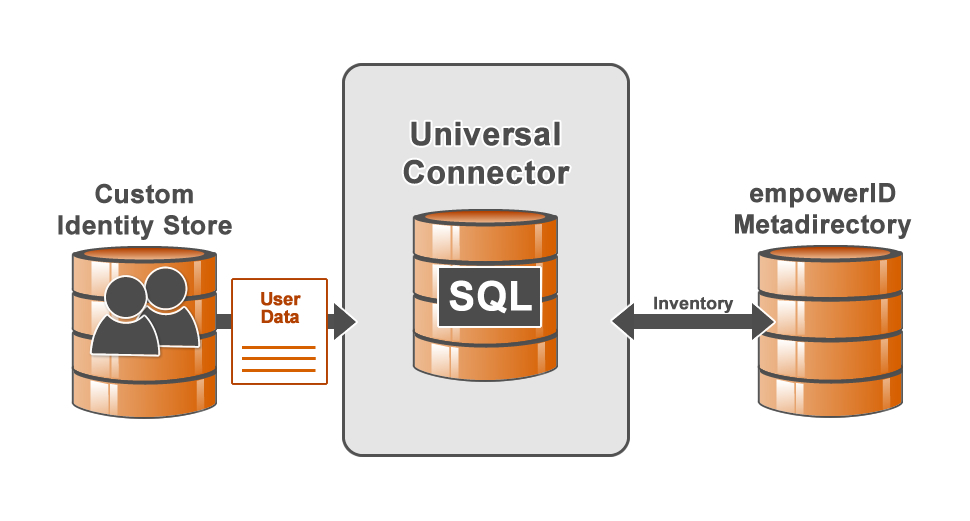 The schema for the Universal Connector provides six tables for importing data:

There is no need to import data to each of these tables; organizations only need to insert the data that is relevant to them. The Universal Connector will still operate if any of the following tables are not populated with data.

As with any managed directory, the Universal connector can take advantage of the full capabilities of EmpowerID, including the RBAC engine, the SSO framework, as well as password synchronization, attribute flow, group membership management, provisioning and termination of accounts, all with full auditing and reporting built-in.

In addition to the above features, the Universal Connector also supports bidirectional functionality or the ability to write changes back to the managed system. This allows organizations to internally process the updates occurring in EmpowerID, either in real-time or in batches. The changes that occur to any connected object in EmpowerID can be executed directly against the custom system or sent over to a ChangeLog queue for delayed batch processing. For the bidirectional functionality to be processed by EmpowerID, some basic operations, such as the Update operation, the Create operation, the Delete operation, etc., need to be defined by the organization. If the connector is set to not use the ChangeLog queue, any changes occurring to its objects will be executed immediately; otherwise, those changes will be sent to the queue. EmpowerID provides an out-of-the-box job, called the "Universal Connector Inbox Processor" job, to claim and process any changes in the batch queue. Organizations can, however, choose not to implement these functions and directly claim the changes from the queue, processing them using their preferred technology.

In addition to writing changes out to the ChangeLog table (if enabled), EmpowerID writes all changes occurring to managed information to its own logs, like in any other connector. These logs present detailed information about those changes, including when they happened, who initiated them, the source of the change, and more. This information can then be audited and acted upon as needed.

The following image shows the flow that occurs between the custom system and EmpowerID when the ChangeLog is in place. A description of the steps follows. 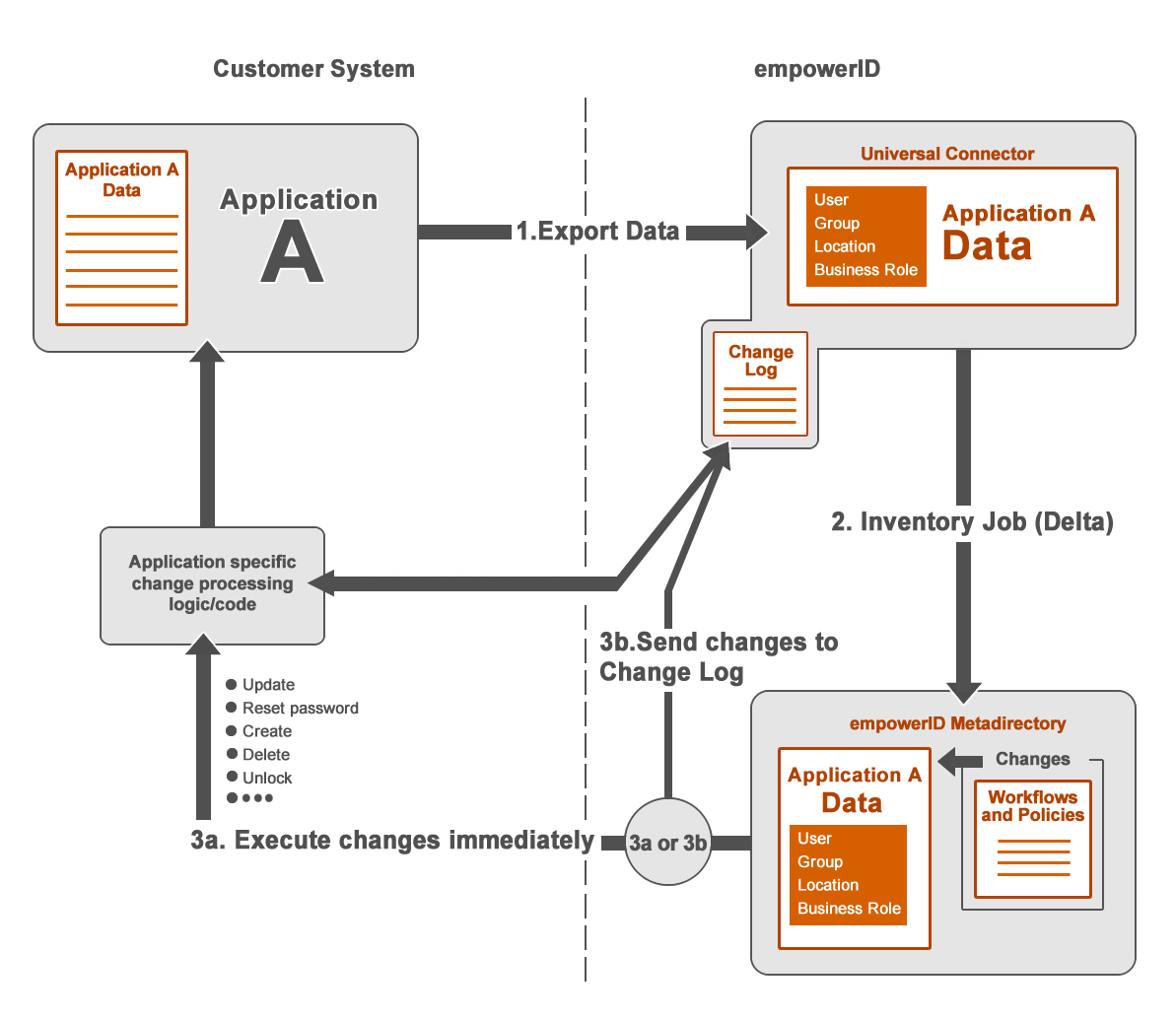 Step 2 - The inventory process is initiated by the organization and executed by EmpowerID. EmpowerID will pull changes from the universal Connector on a scheduled basis, initially importing all data, and delta information from that point forward.

Step 3a - If the ChangeLog Processor is disabled (preferred), changes will be executed immediately using any application specific change processing logic.

Step 3b - If the ChangeLog Processor is enabled, it captures all changes made to objects—either by users running EmpowerID workflows against those object or by EmpowerID provisioning policies—in the account store representing the custom directory or application, and writes those changes to the ChangeLog table of the SQL database associated with that account store.

The following image shows the above processes from a high level. For more details about a particular process, such as the Account Inbox, click the relevant part of the image. This opens a pop up window with more information about the selected process. To close the pop up, click away from it. 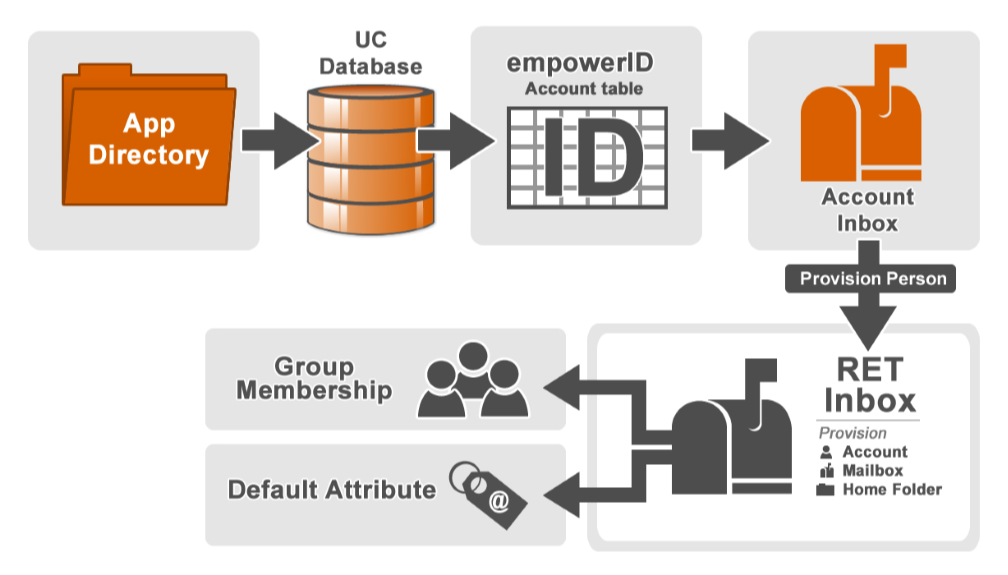